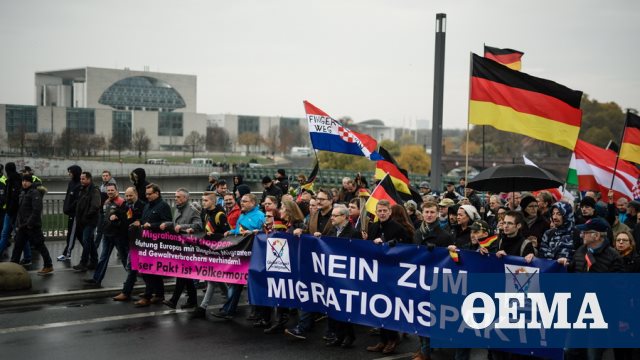 But also events at the end of the First World War

The central message of their opposition to the UN Global Compact for Refugees and slogans against Immigration Policy of Chancellor Merkel currently demonstrates about 700 people in the center of Berlin. There is a parallel, anti-fascist demonstration with many more participants.

Both demonstrations are carried out under extremely stringent security measures, with more than 1,500 policemen guarding areas where protesters will pass through and large parts of the city center will be blocked. "Merkel steals the country and returns it, otherwise the anxieties will get their airbrush," participants of a xenophobic protest singing paraphrasing an old German children's song with direct reference to Saxony, where the Alternative to Germany (AFD) became the most powerful political force in the previous elections. %. "You do not like pogroms, then repatriation!" And "Fortress Europe" is another of the central slogans of demonstrators.

Earlier in Berlin, the bells of the cathedral, where the Universal Eminence took place, celebrated the 100th anniversary of the end of the First World War. Doxology was attended by the head of the German Churches, including the German metropolitan Augustine. "We know that we need to be reminded again and again of where we are going when the peoples start closing and dreaming of their nobility," said Archbishop of the Evangelical Church, Markus Ngrege, and called for adherence to the "Ecumenical Charter" of the European Churches in 2001. " , which all Christians in Europe want to have peace, "said Archbishop Evangelos, adding that all those who signed a pledge to the nergastoun for a humane and social Europe.

However, Aleman Gaudland, leader of Alternate for Germany (AfD), about the events of the end of the First World War and the participation of Angela Merkel in them, is different. "In my opinion, it is a mistake to rewrite history later and to take part in the celebration of the winners." Yes, we lost the war and yes, the policies that led to the First World War had many responsibilities, but German attitude was at least equally involved. , which has been closed, we can not coincide with a number of winners and go along Mr Makron in the Arc de Triomphe, "said Mr Gauland.