Three Conductors of the Baltic States and Three Orchestras will perform at the Grand Guild / Article / LSM.LV 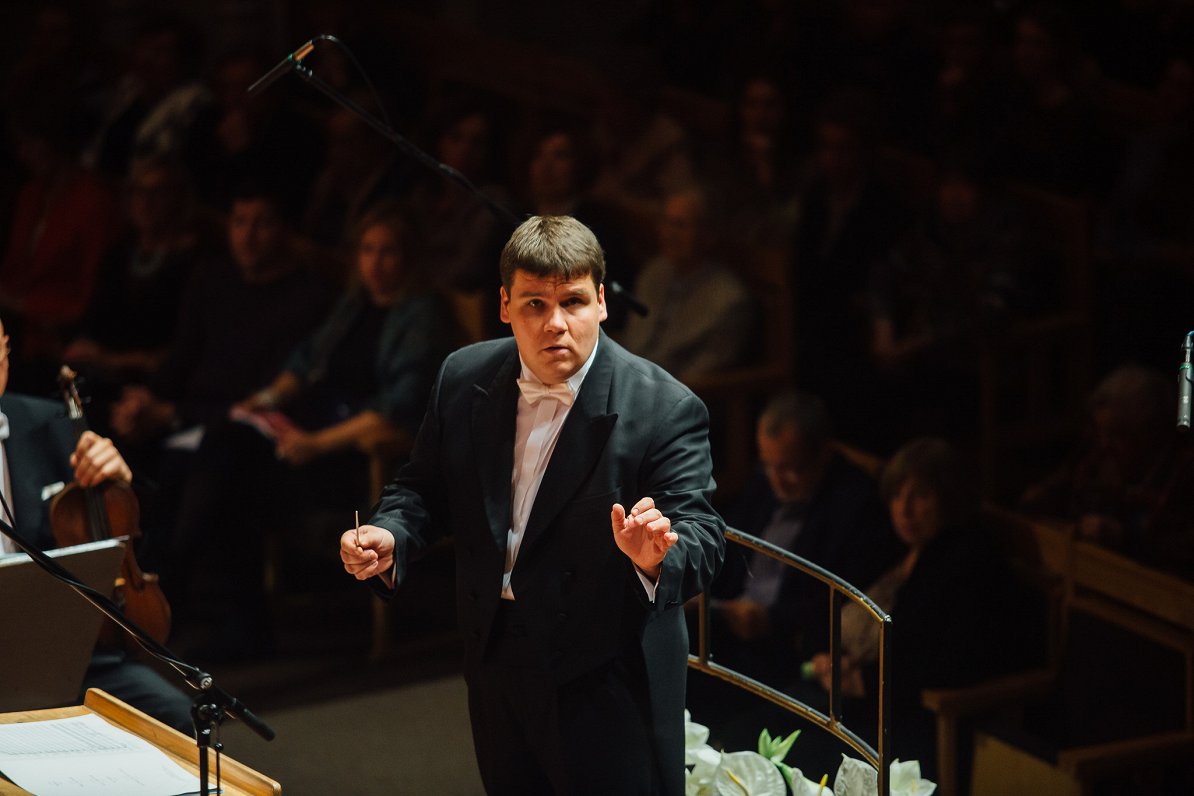 Celebration of the Baltic States' 100th Anniversary, November 24, pl. 7 pm The Big Guild will have the opportunity to watch the unique performance – contemporary music composer Michael Doherty, who plays the two-part symphonic "Time Machine," will act simultaneously on stage by current musicians and three orchestras from the three Baltic states. This concert is part of the "Baltic Symphonic Festival", which is held for the fifth time and where visitors will be able to enjoy the compositions of every composer from the Baltics, the concert organizers informed.

The concert will be accompanied by a light scenic design by director Dāvis Sīmanis with the light artist Mārtiņš Feldmanis and the artist Agni Minnik.

"I am glad that the Baltic Symphony Festival is constantly improving and gaining new musical forms, and this year it will unite all three orchestras of the Baltic capital – not only in the evening, not only on the same stage but also under the leadership of three conductors in my opinion, unique. There is not much music in the world of music, which includes several conductors, one of which is Doherty's Time Machine.

For orchestral musicians it means greater clarity in the rhythmically complex mix of opus, but for conductors it means limiting its leadership to the work of the team, and that is, in my opinion, a rare and great challenge. Each of the conductors in this opus is responsible for one particular group orchestra and its role in the overall soundtrack, and therefore the coordination and interpretation of the composition is a common agreement. I think such a focus on the audience seems unusual and interesting, "says LNSO Andris Poga, artistic director and lead conductor.

Concert director Dāvis Sīmanis emphasizes the symbolic meeting of the Baltic states: "For the Baltic peoples, the role of music in shaping their cultural identity has been decisive, a process based on past and future traditions, a concert in which a unique national musical symphony orchestra of all three Baltic countries will give insights into the musical feelings of their people to eventually combine their common musical experience is a practical proof of this musical identity. In addition, Doherty's two-part joint work, "Past" and "Future", is also a symbolic center the visual concept of the concert, where we will try to find a connection between the times and the connection between the three peoples of the same history with the musical light chains.

At the concert dedicated to the 100th anniversary of the Baltic States under the leadership of Andris Pogs, LNSO will launch LNSO double bass and one of Latvia's most important and oldest composers, Kristaps Pētersons, specially created for this concert "Music" for the great orchestra. The composer himself says that two musical aesthetics are constructive and destructive in addition to the composition. "In all that I wrote, this chaos and the diary was present, but unintentionally. I have only begun to realize the importance of this journal just recently when I joined my own creative laboratory audit – many have to change, but at first it was necessary to have clear about the nature of their musical material, as times change and bring material, "says Kristaps Pētersons.

The concert will include the symphonic "Sea" of the Lithuanian classical Mikaloj Konstantin Churlon, which was presented by the Lithuanian State Symphony Orchestra, led by conductor Gintar Rinkevicius.

Chlorones can be considered as one of the founders of Lithuanian professional music. On November 24 we will be listening to the extended soundtrack "Sea" – a majestic respect for the enormous waters Chullyon admired in one of his literary works, calling the wind as a stumbling block, the waves as an obedient herd and the sea as powerful and helpless creatures at the same time, from which a strong shore On the shore it's just a lot of foam and more than that.

Estonia will be represented at this concert by young Estonian young conductor Mikhail Gerts, who will be the first Latino guest.

Under the leadership of the conductor, the Estonian National Symphony Orchestra will perform the symphonic composition of the world-renowned Estonian composer Erki Sven Tyr called Sow the Wind, part of the well-known text of the Old Testament book, Hoosey, where God speaks to Israel and says, "They blow and storm they do it" . The beginnings of clean work have led to reflections on global climate change, human migration, the rise of extremist movements and other irreversible processes that have emerged from the negligent behavior of people.

At the end of 2017 in Riga, LNSO attended three concerts of the Baltic Symphonic Festival, one of which was nominated for the Great Music Award in 2017 and the "Kilogram Cultures" award. In February 2018, under the leadership of Andris Pogas, LNSO appeared at Vilnius Congress House, and LNSO chain musicians attended the Gintars Rinkevics Concert "BSF," where the grand three-string String Orchestra performed the music of Churlon, Shanberg and Tchaikovsky.

Before the concert on November 24 at noon At 5:30 pm, all visitors will be invited to participate in Oresta Silabice's pre-contract conversations, who have already become LNSO traditions, with the participation of erudite theorists and learned music practitioners – English composer, music lovers Benn Lunn, musicologist Dāvis Angelis, future musicologist and composer Anna Marta Burve, as well as faganti Edgars Karpenskis-Allazs. The subject of the interview is the heritage of Soviet times in our time.

She will discuss how we look at her, how we listen to it, how relevant it is. This theme is also a result of the desire to also consider what is important from the compositions of our times and what will remain for the future. During the interview you will have the opportunity to listen to a sample of music from the middle and the second half of the 20th century in Latvia, Lithuania and Estonia and discuss with music professionals.

Concert tickets are available in the Grand Guild and Ticket Paradise boxes.