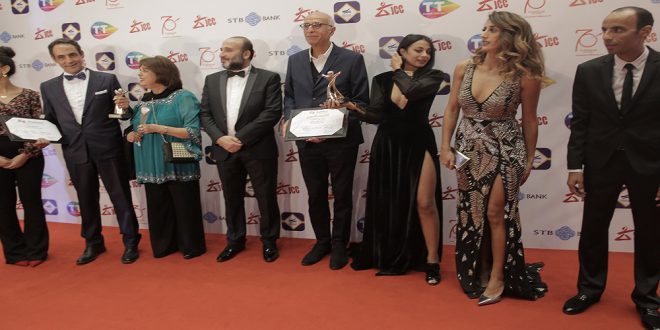 On Saturday night, on November 10, 2018, the curtain was closed for the 29th Carthage Film Festival, during which more than 200 films from 47 countries were screened in official and mosaic sections, including 54 Arabs.

A number of political figures, including Hamma Hammami, the People's Front Speaker, as well as a number of Tunisian and Arab cultural figures including Syrian officials Ayman Zidane and Abdel Monei Amir, attended this session.

A number of actors and directors have expressed their luck in the coronation they received from the most prestigious Arab festival.

Ahmed al-Hafian said in his statement to the "source" that the project was submitted by Mahmoud bin Mahmoud Sadiq and speaks of the early in Tunisia, stressing that victory is inevitable if the case is just.

Al-Hafian added that economic, social and political issues are an excuse to talk about everything that man is, and that man is the center of every story and every question, his injuries, feelings and all that lives.

His director, Jude Said, the director of "Rolling Travelers," who tells the story of the actor Ayman Zeidan's virtual tour during the Syrian war, called on all Tunisians to see his four-a-side film.

Said said the film tells the ordinary dream of the Syrčans about living in peace and gaining the simplest elements of life, such as water and electricity.

Movies at the Carthage Film Festival 2018