Flower reception for the Mawai team 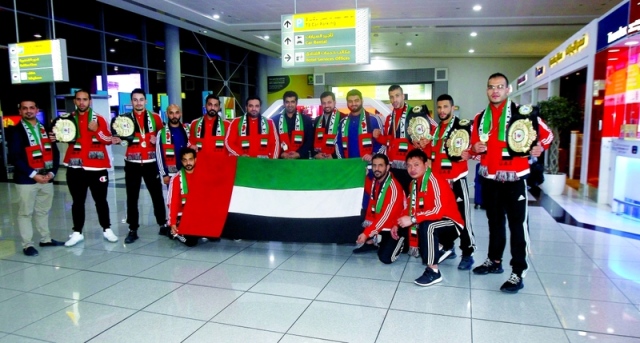 Team Mwai Tai team arrived after participating in an international elite championship that ended yesterday evening in Amman, Jordan and participated in the 28 best players from 14 countries that won our team with 5 gold medals at the Abu Dhabi International Flowers Bouquet a number of board members and a family of players.

Badrouh Tariq Al Muhairi, a member of the board of directors, stressed that magic in the elite championship is an important stage in the federation that has not finished its second year, encouraging the continuation of efforts and giving, reflecting the clear face of the United Arab Emirates' sport in regional and international forums. And an outstanding performance that ended the Elite Championship's overall ranking, which was the first time witnessed by the use of electronic arbitration as the success of the Advanced Arbitration process organized by the Emirates Union of Mwai Tai and kickboxing recently, while the tournament is a good preparation for the Team Participate in the upcoming Asian Championship held in Macau's.

The United Arab Emirates National Team for Mwai Tae has kidnapped the elite international championship after winning most of the championship titles, resulting in winning under 57kg Zakaria Al-Jamari defeating Sudan Mohammed Ramadan and Nooruddin Samir Ali Amir (Iraq) weighing less than 71 kg, and saw the victory of Amin al-Mutasima weighing 75 kg on the player Jordan Abdul Jabareen .. Elias Habib succeeded in the victory of Egyptian Tarek Al-Sayed, weighing 86 kg, and ended Nasser al-Qahtani winning a weight of 86 kg on Saudi Wissam al- Harbi. The mission of the SAE team was led by Tarek Al Muhairi, a member of the board of directors and chief executive of the federation Mohammed Al-Mahdhar, Mishari Al Mansouri and five players are Nasser Al-Qattan, Zakaria Al-Jamari, Noor Al-Din Samir, Amin Al-Mutasim, Al- , And Elias Habib Ali.