Today is the Phan Van Vinh process and 91 people 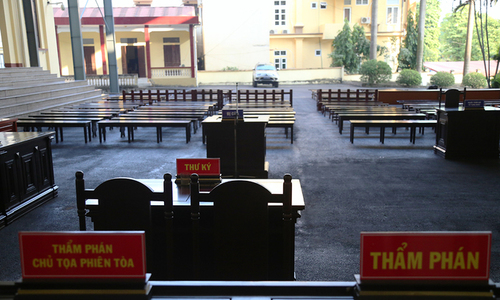 Mr. Vinh and Hoa are responsible for the criminal charges Abuse of position and authority at work, Under the provisions of Article 356 of the Criminal Procedure Code 2015, the criminal band is between five and ten years in prison.

The panel will invite 73 persons with related rights and duties, 14 witnesses and 3 Investigating Investigation Agency investigators (Provincial Police Phu Tho).

On 11/11, lawyer Nguyen Thi Huyen Trang (Mr Vinh's defense) said the client's health was stable, ready to take part in the opening session. Vinh still needs medical staff in court because "high age, many diseases can not say anything". Ms. Trang expects the process to be open, transparent and fair.

Lawyer Hoang Dao (defense of Phan Sao Nam) said the crime Organization of gambling This is not a particularly serious crime, so expect your client to be considered a humanitarian punishment. He believes the judge will have a fair assessment.

Lawyer Nguyen Van Chien also said his client, Nguyen Van Duong (43 years old, former president of the CNC), was not physically and mentally healthy. According to the court, it is a large-scale trial with defendants in many agencies, Chien lawyers expected the executive council to be in the spirit of the reform of the judiciary, and in particular to apply the principle of litigation under the Criminal Procedure Code 2015.

According to the authorities, the promised property of the player has broken out through fraudulent behavior through Facebook's social network. Specifically, between May 5, 1974 Le Van Huy (21 years old, from Quang Tri) mercenaries money on the Internet to find the right to use the account of others to spoil the property.

Huy found a woman account in Phu Tho province and took over, her friend's trick bought 110 scratch cards worth 55 million. This card is for playing online at Rikvip / Tip.Club and for playing with you.

When Huy's fraudulent behavior appeared, the investigating body discovered a gambling line via the Internet in many provinces.

Following a lawsuit on 30 September 2011, Nguyen Van Duong established High Technology Security Investment Development (CNC). On October 10, 2011, Duong and Hoa signed a Memorandum of Understanding (MOU) for the CNC to earn 80% of the profit, the C50 received 20%. However, the C50 did not support the capital nor sent employees to participate in this company, but Yang himself.

On 3 May 2012, Duong sent Mr Vinohi and Hoo a written report on the state of on-line gambling in Vietnam and requested representatives of the General Police Department and the C50 "to create conditions for cooperation with the CNC … to publish gambling on the Internet, revenue to perform the tasks.

At the beginning of 2016, Mr. Hoa discussed with Mr. Vinh the idea of ​​building a national defense system for cybercrime and assigning it to the CNC. However, to do this, CNC should focus on social networking, on-line payment gateways for information gathering, crime capture and revenue to finance the construction of the system. Defensive.

In view of this fact, Duong further proposes to CNC to create an online gaming model that allows users to convert a virtual account to a virtual card and a CNC electronic wallet. At this time, Duong has entered into a contract with Phan Sao Nam VTC Online for online gaming.

Mr. Vinh knows that these two companies associate Operation Rik.Vip with a game of disguised gambling, but are not reported to the manager, does not run a functional verification unit to handle …

According to the prosecution of the CNC gambling organization on the Internet, they have earned trillions of billions of money, but the money from this gaming activity has not been invested in national cybernetic systems. only a very small amount. CNC only converted to C50 by 700 million and antivirus software.

After 27 months of running a software program and a technology solution that includes the names of RikVip / Tip.Club, 23Zdo, Zon / Pen, Yang Line, Nam has teamed up with many companies providing Virtual Money Exchange Service for real money. They set up a system of 25 first-level agents, nearly 6,000 agents on the second level who provided services to convert virtual currency into real money, and vice versa. The network has drawn nearly 43 million online gambling accounts. The total number of illegal revenue has reached nearly 10,000 billion.

On the same day, the indictment of 235 pages, the People's Procuratorate of Phu Tho province, made a correction and added part of page 234. The Prosecutor's Office therefore decided not to include Nguyen Duy Thinh in the prosecution decision. was suspended for the investigation he wanted.

The defendants did not send the defendant Tran Viet Truong to prosecute the gambling organization (p. 234), as he was accused for two reasons of organizing gambling and gambling listed on page 233 of the indictment.